The Honoring of Athlete Victims of Sexual Violence

What was so significant about the ESPY awards this year?

The honoring of over 100 individuals who were subject to the abuse of Larry Nassar, the disgraced doctor of the USA gymnastics team. Nassar was sentenced to 40 to 175 years in prison last year, after over 150 women spoke out against him between two different court cases.

During the ESPY awards, three of Nassar's victims spoke out. Aly Raisman, Sarah Klein, and Tiffany Thomas Lopez. They described how despite their having reported the abuse, administration officials refused to act to protect them or carry out investigations, which consequently allowed many others to be victimized. Klein during the awards said, “Speaking up and speaking out is not easy. Telling our stories of abuse over and over and over again, in graphic detail, is not easy…”

Lopez also spoke out, bringing another important topic to light, which is the need for society to become used to uncomfortable conversations that involve sexual assault. She said, “There are a lot of conversations in our society that we tiptoe around as if they’re something to avoid…” Lopez found that sharing her story on stage was a step forward in her healing journey.

These women showed tremendous courage, which was honored at the ESPY awards this year. They showed how empowering it can be to speak out about abuse and to unite their voices as survivors. Alison Overholt of ESPN the Magazine commented during the awards that by these brave women speaking up and fighting back, they are making waves to make change for generations of the future.

These women highlight the importance of speaking up, which is the the primary mission of MapYourVoice - giving survivors a safe place to speak up. MapYourVoice can be a platform for survivors wanting to take courageous steps forward -- the way these gymnasts have -- to do so safely and anonymously. 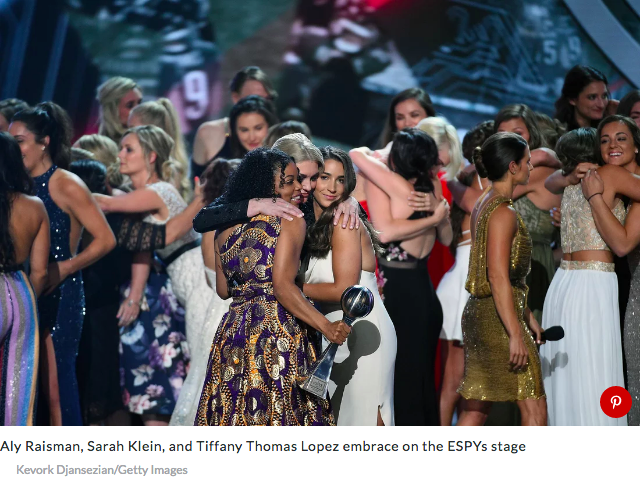